Back
Can I Freedive If I Have Asthma?

Asthma is a very common respiratory condition affecting as many as 334 million people worldwide and many of those have, or will have an interest in diving. For scuba divers, asthma has long been regarded as a big no-go and it seems like a lot of freedivers have suffered frustration in visiting their GP for dive medical clearance, only to be told that they can't dive, although it's reasonably clear to them that the doctor doesn't understand the differences between breathing compressed air at depth, and diving on a single breath from the surface. There isn't a lot of research into this delicate area of diving medicine and many physicians will err on the side of caution, but we've produced this guide to some of the major issues involved to help you to inform yourself of the risks prior to approaching a qualified diving medical professional.

Is It Safe To Freedive If I Have Asthma?

The bottom line is really that nobody knows the answer. We really don’t have any research at all about - actually any - medical conditions and their interaction with freediving so it’s best to bear that in mind when taking advice (including the information below) from anyone. That said, there are lots of specialist dive medics around, and they would have more of an idea than your basic GP, and certainly more of an idea than me. The other caveat is that because I don’t know you, don’t have access to your medical records and haven’t had the opportunity to examine you, I’m not in a position to overrule any decision made by your own doctors. Please bear this in mind when making any decisions on the basis of this information.

That said, it's right to be suspicious of a GP who doesn’t have specialist knowledge of freediving saying “no diving”. It’s likely that they don’t understand what actually goes on and, of course, are likely to be (perhaps overly) cautious on your behalf. Nevertheless, before undertaking any kind of underwater activity, regardless of any medical conditions you might or might not have, you should ask the advice of a qualified medical person that you trust.

Asthma, as I’m sure you know is a condition where the airways can become hyper-sensitive in response to triggers like cold, exercise, infection, stress and airborne irritants. When this happens the airways narrow which affects the flow of air into (and out of) the airspaces of the lungs, giving you that ‘wheezing’ feeling. In addition to this the condition can sometimes cause inflammation and hyper secretion (too much mucus) in the smaller airways (bronchioles) which can cause “plugging”. Often people with asthma will have minimal symptoms on a day-to-day basis but might have a number of “attacks” throughout their life which can be extremely serious, sometimes requiring intubation (a tube down into the lungs) and artificial ventilation. Lots of (usually young) people each year die worldwide because of these attacks. Others are milder and can be treated with inhaled bronchodilators (drugs that widen the airways) like salbutamol, ipratropium bromide and, in extreme cases, adrenalin. The cause or trigger for an attack is often unidentifiable because the hypersensitivity reaction can take a couple of days to develop fully. Having one major attack (e.g. requiring hospitalisation) in your life puts you in a higher risk category than someone who has never had one. Having lots of more severe attacks is obviously a worse situation again. 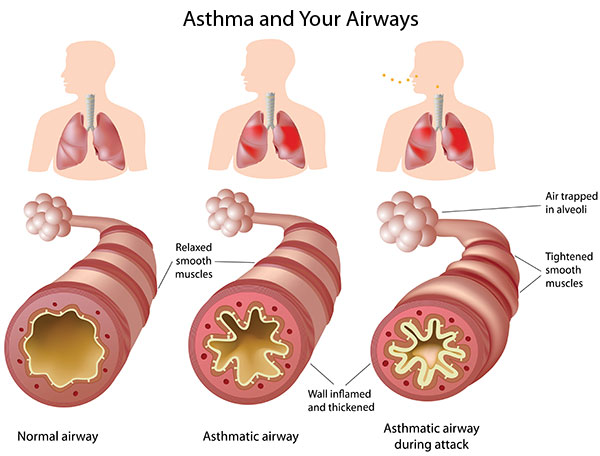 It's worth mentioning that things like stress and anxiety are often misdiagnosed as asthma because of the subjective feeling of breathlessness or “tightness” in the chest which accompanies them. The best way to check whether you really do have asthma, and one of the best measures of your lung function generally is called spirometry and this is likely to be something that a specialist dive doctor would request, along with other, more complicated measures of lung function, before signing you off as safe to freedive. Another good (and much cheaper) measure, however, is peak flow. If you don’t have a peak flow meter I would suggest you ask your GP to prescribe you one or get one from a pharmacy. Take recordings of your peak flow 3 times a day for 2-4 weeks - if the numbers are good and there isn’t too much variation day to day, this is good evidence that your asthma is well controlled (assuming you were correctly diagnosed in the first place).

Why Do People Get Told Not To Dive With Asthma?

One of the main reasons that dive medicals screen for people with asthma is that the dry compressed gas that you breathe on scuba is a potential irritant that could trigger an attack. In the freediving context this is obviously not such a problem and that’s one big reason why it *may* be safer for freedivers with asthma. That said, there are a few reasons why freediving with asthma may present greater risks than we think.

The first of these is the unpredictability of airway irritation. It may be that if you take your preventer each morning you’ll be fine to dive but there’s no guarantee that there won’t be some irritant - pollen, exhaust from the boat engine, your mate’s foetid breath or whatever, that might just set you off on that particular day.  Don’t forget that something you ran into 2 or 3 days previous could also have an effect too. If your asthma is typically exercise induced, that would be another concern for me - although you’re not breathing compressed air, you will be working reasonably hard in, and under the water. Competition or pre-dive stress is another issue in this category too. 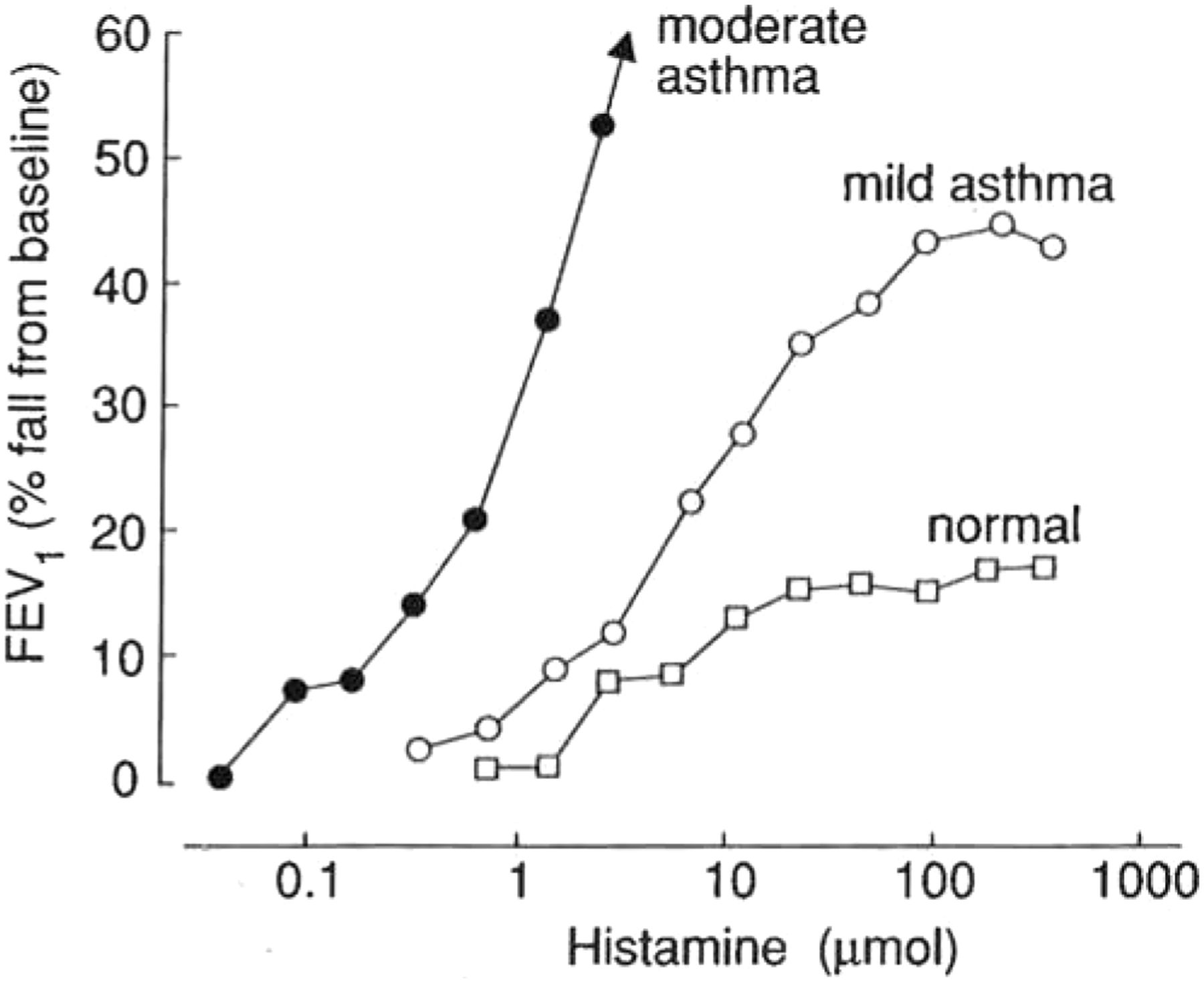 Second, asthma of any form will likely complicate any kind of rescue attempt that you might need for reasons that have nothing to do with asthma at all. Blood, for example, is very irritating to the airways anyway so it’s possible that someone with asthma could have a particularly bad reaction to a lung squeeze which might otherwise cause no significant respiratory symptoms at all. Even something as simple as accidentally inhaling some water (getting a wave in the face when you don’t expect it or whatever) could potentially cause a bronchospasm. If you blacked out or drowned it could conceivably be harder to ventilate (and therefore to resuscitate) you if asthma were a factor.

Third, depending on the true severity of the asthma you have, it could be that your small airways have some small mucus plugs or some low-level inflammation, even when you feel completely well. It’s likely that your lungs will still function well like this and you’ll be able to do most things. In the extremes of hypoxia, however, it might be that this puts you at greater risk, and may make it more likely for you to get a lung squeeze too.

Fourth, "gas trapping" which occurrs when narrowed airways have difficulty allowing air out from the alveoli, and other small airspaces in the lungs, presents a serious problem for freedivers on the ascent: Because of Boyle's Law, the trapped gas will expand rapidly between 10m and the surface which puts you at risk of air embollism, lung squeeze and even mediastinal rupture (definitely worse than it sounds) where air squeezes itself out of the lungs and into the space around the heart, trachea and oesophagus in the chest. Whilst lung squeeze is painless, you'd definitely know about that one.

Lastly, compression of the lungs below residual volume (i.e. below 25-30m) may (or may not) be an irritant which could bring on symptoms of asthma once you surface. This would likely create a very dangerous situation because it could affect your recovery breathing and (as mentioned above) any kind of rescue attempt that became necessary as a result. I don’t really know about this at all - if you do, please let us know! -  but it makes sense to me that it could happen because of the compression of the lungs at depth.

This All Sounds Scary, But I Really Want To Dive - What Should I Do?

Don’t be disheartened. If you're a freediver with asthma, it’s important for you to understand the risks but the reality is that freediving with a trained and competent buddy to 10 or 15m, remaining well inside your hypoxic limit, presents similar challenges to your physiology compared to, say, swimming or surfing. The breathing techniques that you’ll learn and practise as a freediver are likely to help symptoms of asthma in the long run (as long as you progress slowly) and the relaxation required is also likely to be beneficial. If your asthma really is mild and well controlled, and you can demonstrate this with spirometry and regular peak-flow monitoring I think it would be overcautious for a GP without specialist knowledge to tell you not to dive. Health, in the end, is about wellbeing, not just the presence or absence of disease, and if freediving is something very important in your life, you'll probably suffer more by not taking the risk than by taking it. If you’re looking at deep freediving (30m+) I would strongly suggest you get specialist investigation from a trained, competent and knowledgeable dive specialist doctor before you do.

Happy Independence day!
Best wishes from Lobster team. Celebrate with our promo code.
4 years with you!
The past year was the year of breaking records and we could not be happier that these records were achieved together with Lobster Neck Weight.
Lobster gets the Oscar in the world of design
Can you believe this? We WON! Lobster is proud to announce that we won the Red Dot Design Award for Production Design in the category Innovative Products.
0 items added to cart
Continue shopping
View cart